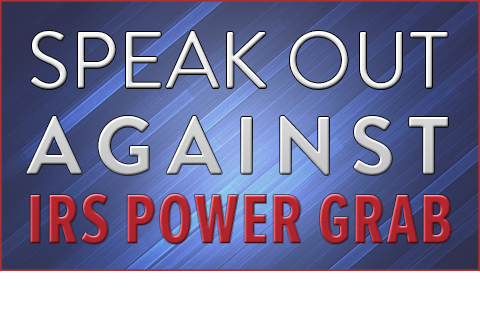 This is a huge victory for American democracy, the First Amendment and our grassroots supporters. President Obama’s IRS is abandoning its blatantly heavy-handed regulation to ask charities to disclose the Social Security numbers of donors giving $250 or more annually. Tea Party Patriots activated its grassroots supporters using our website, email and social media presence and they responded – flooding the IRS’s public comment page with more than 16,000 submitted comments on the regulation, which accounted for 43 percent of the more than 37,000 total comments received on the proposal. We will continue to keep a close eye on the IRS and fight back against any attempt to improperly expand its power and threaten American citizens and their constitutional rights.

UPDATE: Please note: The open comment period has concluded, but we're still collecting signatures and comments to send to legislators. While the IRS will continue to try to push for these regulations, we can continue to put pressure on Congress to rein in the IRS. Please sign below and send a message to your legislators.

So, you think the IRS targeting of conservatives is over? Think again! Right now, Obama's IRS is proposing a new regulation that would require you to submit your social security number when you donate to charities you believe in.

Leave a comment to help us stop this #IRSPowerGrab! Tell them to back off of your social security number!

Individuals should have the right to support the causes they care about without having to worry about a rogue government agency putting them on a list for extra scrutiny. This is about individual privacy and security. This new regulation is a nightmare waiting to happen and we must stop it now!

There is currently an open comment period on this proposed regulation. If we can generate enough comments before the deadline of December 16, 2015, we can prevent this rule from going into effect. We've stopped this administration by flooding them with comments before, we can do it again! But we must act now!

Leave a comment and we'll submit it directly to the IRS public comment portal. Then share with everyone you know who is fed up with this out of control administration! More Information

Thank you for leaving a comment on the proposed IRS regulations. It is outrageous that this administration keeps doubling down on tracking the actions of every day Americans. We can win this fight and stop this IRS power grab, but we can't do it alone. Please think of 10 of your friends who are sick of this administration and ask them to leave a comment as well. Even if they've never been involved with the Tea Party before, we need as many people as possible to speak out about this insane breach of privacy. The deadline for the open comment period on this regulation is December 16, 2015, so we must act quickly!

Thank you so much for your support and everything you do each and every day to help secure our constitutional rights.

Petitions are most effective when everyone gets on board. Help get the message out by sharing on Facebook and Twitter. Or send an email to your friends who may want to help change our government for the better.